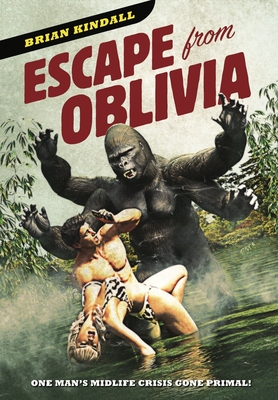 He fantasizes about saving damsels in distress and battling beasts. He'd better be careful what he wishes for...

Will Kirby has hit his mid-life crisis at full speed. Once a rugged outdoorsman, he's now soft around the middle and trapped in the banality of minivans, suburbia, and his eight-year-old's dance recitals. But his constant daydreams of heroic adventure suddenly fall within his grasp when an old pulp author's journals reveal a portal to another world.

Immediately forced to rescue two gorgeous babes from attack by a Japanese Zero, Will lands ashore on an island paradise brimming with adrenaline-pumping action and consequence-free sex. But with danger around every turn and the faint call of his former life tugging at his mind, he wonders if his fantasy has turned into a deranged nightmare.

Can Will discover what it really means to be a man before he's forever lost to an illusion?

Escape from Oblivia is a revealing exploration of the male psyche and modern man's confusion in his attempt to reconcile the sexist hero role model handed him by pre-feminist generations with today's less defined, and more complex expectations of men.

If you like magical realism, irreverent irony, and satirical stabs at tired tropes, then you'll love Brian Kindall's racy romp into freedom.

Buy Escape from Oblivia to strip down and dive in today